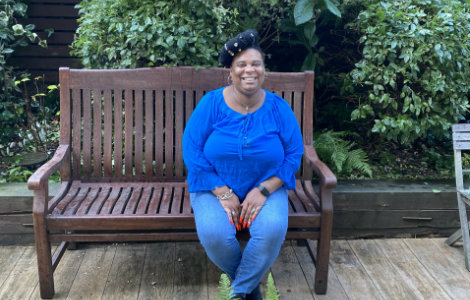 In honour of World Alzheimer's Month, we are sharing Senior Care Assistant, Sylvia's story. Working at the dementia wing of Leonora House, Sylvia’s passion for improving quality of life has yielded some remarkable results. From facilitating the emotional reunion of two siblings, to providing end of life care that is tailored to each person – her commitment to care is helping many of our residents to live enriched, fulfilled and happy lives.

Originally from St Lucia, Sylvia, has been working as a carer for the last 15 years. Her journey into the field came shortly after an Alzheimer’s diagnosis within her family. Determined to learn more about the condition so that she could take care of her grandmother, she moved to the UK to find answers.

“When my grandmother was diagnosed with Alzheimer’s, we felt powerless and unable to help her. There was very little information available to my family and we had no knowledge about what the illness involved or how it could be treated. Eager to find out more, I decided to come over to the UK so that I could learn how to care for her.”

During my time as a carer, the greatest lesson I have learnt is that you need to be patient, loving, understanding and have great listening skills. In my current role at Leonora House, I assist residents with personal care, meals, tidying up their flat, and escorting them to their hospital appointments. I’m also the medication champion, acting as the first port of call for any medication related queries.”

In July 2018, Sylvia took Leonora House resident and dementia patient, Otto, to his hometown, Sanremo in Italy. Otto had repeatedly expressed a wish to see his sister after sixty years, an emotional reunion that Sylvia felt compelled to make a reality.

“Otto came over to the UK in the 1950s and had not been back to Italy since then. All his life he had longed to go back to his home country to see his family, but his busy work life never permitted it. He kept in touch with his sister who still lives there and spoke to her on the phone every so often. After every call, he was always vocal about wanting to go to Italy to see her. After running it past his social worker, we began to make all the necessary preparations from our end, sorting his documents and finances, as well as applying for a British passport on his behalf. After getting everything in order, three of us went to Sanremo with him so that we could provide round the clock care during his visit. He was overjoyed to see his sister and after his trip, he made an increased effort to speak to her on a regular basis.

Known as the City of Flowers due to its bloom-laden streets, the trip allowed Otto to re-connect with both his love of nature and his past.

“Otto was a real lover of the great outdoors”, says Sylvia. “As well as spending some quality time with his sister, we also took him to visit the botanical gardens so that he could admire all the flowers. He had many memories of visiting as a child, which he spoke of fondly during the trip.”

After returning to the UK, Sylvia noticed that the visit had helped Otto to achieve some peace of mind and reach a state of contentment.

“Back at Leonora House, Otto used to get agitated quite easily but when he was in Sanremo he never did. There was a stark contrast in his mood before and after the trip. Once he returned to the UK, he was very calm, and it was as if he had achieved something he had wanted to do for a very long time.”

Sylvia goes above and beyond to fulfil residents’ wishes in other ways, including at the end of their lives.

“I try my best to make a positive difference at the end of our residents’ lives. I worked with a lady who had cancer and was bedridden. She was frightened and she didn’t want to be alone, so I spent a lot of one-on-one time with her. We made sure she was comfortable and that she wasn’t in too much pain. When I felt that the support we were giving wasn’t enough, we asked the hospice to come in and administer medication. She told us that she wanted to go back to the Seychelles so that she could spend her last days with her family, so I escorted her to the airport where her sister collected her.”

Working in partnership with St John’s Woods, the carers at Leonora House provide personalised end of life care that meets the needs of the individual, and of those close to them.

“End of Life care can be tough as the care needed can vary greatly from person to person. We’ve got a good support group with St John’s Woods that includes district nurses and hospice carers. If I need advice, I will ring them up straight away and run my query past them. It’s good to get moral support from a reliable source.”

Our care colleagues are regularly trained on the latest best practices of how to increase quality of life for individuals with dementia. In recent years, this has included training through an ‘immersive tour’, which recreates the experience of what it is like to have dementia.

“The dementia tour was an eye-opening experience that has changed the way I work. It made me think about things I had never taken into consideration. During the exercise, I couldn’t hear or see properly, so when the trainers were touching my sleeve or trying to talk to me, I felt very disturbed and unsettled. It made me think about how I used to walk into a residents’ flat without announcing who I was. I wouldn’t want someone to stroll into my home and start talking to me without prior warning. Since then, I always make sure that I ring the doorbell and wait for someone to open it before introducing myself. After seeing how much dementia can affect an individual’s peripheral vision, I now also make a conscious effort to stand directly in front of our residents so they can see me clearly.”